After a quick installation process, the first thing you’ll notice is the complete new interface that is presented to you. It has a distinctive Windows UX (User eXperience) look and feel. Some options in the interface have moved but you’ll get used to it very quickly. In my opinion it has become more logical. Some items seem to have removed, like the “Imported Backups” section, but it hasn’t, it just doesn’t show untill you imported a backup. 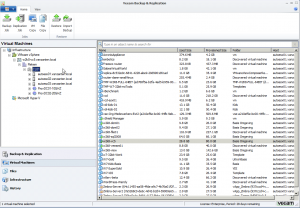 Best part is how you can now search VMs or objects and directly create a job from them or add them to a job. This is one of the biggest usability improvements in my opinion. In earlier versions selecting the VMs for the job would take more actions and when adding a VM to a job later on, you had to go through the whole wizard again. In this new version you just right click a VM and either select “Add to backup job – New” or “Add to backup job – <existing job>”.

With VeeamZip you can directly create a one-time backup of a VM, a so called VeeamZIP. The VeeamZIP is easy to take with you and transfer to another system. You can run the Free edition on your laptop, connect to vCenter, right click on a VM and create a VeeamZIP image on your laptop. If needed you can recover VM files (vmx, etc) from the VeeamZIP and even restore Guest OS files. And ofcourse restore the complete VM into a vCenter. When creating a VeeamZIP, the same backup engine is used as with the full products, which means it does compress and dedupe the data.

Another big improvement in this release is the extention of the vPower technology to Hyp…. Hype…. Hy…. Oh damn, one last try. Extention of the vPower technology to Hyper-V. There, I said it. The new 6.1 release will use vPower to run a VM directly from backup or any restore point. vPower enables instant VM recovery, which lets you restart a failed VM from a regular backup in as little as 2 minutes.

There is a long list of improvements and features for the 6.1 version which I didn’t test thoroughly, I had a quick look at what is new and if this really is an improvement to me. I must admit I really like the new interface, the changed presentation and selection of VMs is a big improvement. I expect the new VeeamZIP feature to be used quite often.

One point of critique, I don’t like that the Free edition is the full blown installation of the full edition without license key. Which means that I get a SQL Express database running on my laptop just to transfer files. When trying to create a ThinApp package, I noticed that the install footprint was 1.3GB. That is way to big to be ‘a handy tool’. However, someone whispered in my ear, there might be a change to that coming up………